January 22, 2009
Obviously, the site hasn't been updated in awhile. And for good reason: It's been a tad busy around here.
To wit:
June 16, 2007: Married at Evermay in Georgetown. It was a lovely, fun celebration of life!
April 3, 2008: Graham Johnson and Julia Grace Bertele were born. Bliss. Perfection in human forms.
Come join us on our family blog.
grahamandjulia.blogspot.com/
grahamandjulia.shutterfly.com/ 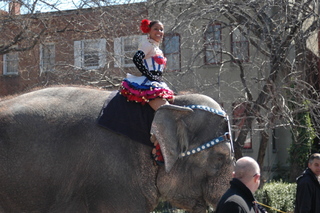 The View Out My Window
Washington, DC

The View Out My window
The Circus Comes To Town!

Therese Droste has spent 20 years as a health, fitness, and career writer. Her articles have appeared in The Washingtonian, Health, The Washington Post, Prevention.com, DiscoveryHealth, The Lancet, Reuters, and a gazillion other print and online publications.

Therese was a founding career expert for Monster.com. Many of her articles found a second life in syndication via numerous online television sites, including ABC, NBC, CBS, CNN, as well as in national newspapers. Therese was a contributing author to the book, Monster Careers: How to Land the Job of Your Life (Penguin USA; 2004).

Therese has an MA in fiction and nonfiction writing from John Hopkins University, and is an alumn of George Mason University's Heritage Fiction Writing Workshop.

Antioxidants: Good For Your Heart
Online Friends Make A Difference

Things That Go Bump In The Night
Having the same bad dream over and over? Learn how to control the outcome with a few simple techniques.
Choose Your Medicine: Laughter, Music, Optimism
11 ways to knock out stress and lower your chance of heart disease

"Reiki, Hope or Hype?"
Monster.com "How to Deal with an Absentee Boss"
Health Magazine
E-mail the author
Authors Guild
Loading…}